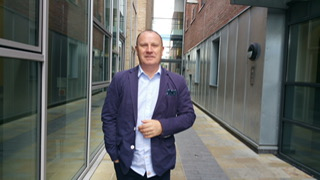 Gary is a Senior Research Fellow at the Kennedy Institute for Conflict Intervention at Maynooth University in Ireland. He is also an adjunct Professor at the Candler School of Theology at Emory University in Atlanta. Gary is a faculty advisor to the Negotiations Strategies Institute, which is a Harvard University programme for leaders in the Israeli / Palestinian context. He has lectured in political, religious and academic forums throughout Europe, South Africa, the Middle East and the U.S.A. seeking to engage, mentor and share lessons from the Irish peace process. He has travelled widely in the USA and has spoken in Churches of all Christian denominations as well as other faith settings. Gary has also given lectures in a number of College, University and denominational settings across the United States from Harvard University, Boston College, Boston University, Tufts University, Emory University, Duke University, University of Alabama, Florida Southern College, Birmingham Southern College, Fairmont State University, Wesleyan WV, Rollins College, St. Cloud University, St. John’s University Minnesota and Hamline University.

Prior to founding Rethinking Conflict, Gary spent 28 years as a clergy person in Belfast and was involved in the “Northern Irish Peace Process.” He has been and continues to be a close advisor to Protestant ex-combatants on the civilianisation efforts of paramilitaries.

Gary was a member of a working party on sectarianism in the early 1990’s drawn together by the Irish Council of Churches, which resulted in the publication “Sectarianism”. This was the most detailed report ever made to the Irish church on this topic. The co-chair of this working party was Mary MacAleese, the former President of Ireland. Mary and her husband Martin are very supportive of Gary’s peace building work.

Gary was also the Methodist representative on the Loyalist Commission, a group consisting of loyalist paramilitaries, community activists and church representatives. This group received international press coverage. In July 2002 the former British Secretary of State Dr. John Reid met the commission at Gary’s church, this was only the second time that an official meeting between paramilitaries and a British Secretary of State, had taken place in the history of the conflict.

In June 2009 two of the loyalist paramilitaries groupings the Ulster Volunteer Force and the Red Hand Commando after almost 35 years of an armed campaign announced the decommissioning of their weapons statement in Gary’s church. They were the only group of ex-combatants to do so in a church setting. In March 2014 Gary was one of five people from Northern Ireland asked to hold a private briefing with President Bill Clinton on his visit to Ireland to discuss the NI peace process.

Gary was the Superintendent / CEO at one of the largest Methodist Missions in Europe at East Belfast Mission from 1999-2014. In 1999 when he was appointed to the East Belfast Mission it had 20 employees and a budget of £600,000. Over a ten-year period it grew to have one hundred employees and a budget of £3 million per year. East Belfast Mission was recognised as one of the most creative churches in the areas of social justice and peace building in Ireland. As an organisation it has been at the forefront of efforts to quell interface violence and is recognised by both the British, Irish and the American administrations as having a leading role in developing peace within loyalist communities.

Gary played a leading role in establishing the Skainos project which is acknowledged as the largest faith-based redevelopment project in Western Europe. The vision behind this was to develop a world class urban social justice centre, in a post-conflict society as a model or co-existence and shared space.

In March 2008, Gary had the honour of hosting Her Majesty Queen Elizabeth and the Duke of Edinburgh at East Belfast Mission, where they gave very public recognition to the work carried out in the local community.

Over the years Gary has worked with both Republican and Loyalist communities in peace building and reconciliation. He has facilitated dialogue between these groups on numerous occasions. Behind the scenes he has taken part in discussions with those wedded to violence in Northern Irish society, trying to present an alternative way to resolve their differences.

Gary first engaged with Sinn Fein in the late 1980’s and has maintained these relationships for almost three decades. He has worked closely with Catholic colleagues to build peace and reconciliation. In 1992 to 1999, along with a Catholic Dominican sister, he developed the Forth-spring Community Project. This was a one million pound centre on the peace line in West Belfast, which  allowed the two communities to come together during some of the darkest days of the conflict around the Shankill bombing and Greysteel tragedies.  He was instrumental in facilitating negotiations with paramilitaries and government officials and in 2007, his contribution to peace building and better community relations was formally recognised by the Queen.

Gary talks about the importance of the church being out in the community and engaging with it at a grass roots level. He argues strongly that the role of the faith community should always be one of building peace and transforming fragmented communities.

Since the completion of the Skainos project in 2012, Gary has been increasingly approached both locally, nationally and internationally about sharing his life experiences around social justice, conflict transformation, peace building and addressing religious fundamentalism.